A Love That Multiplies 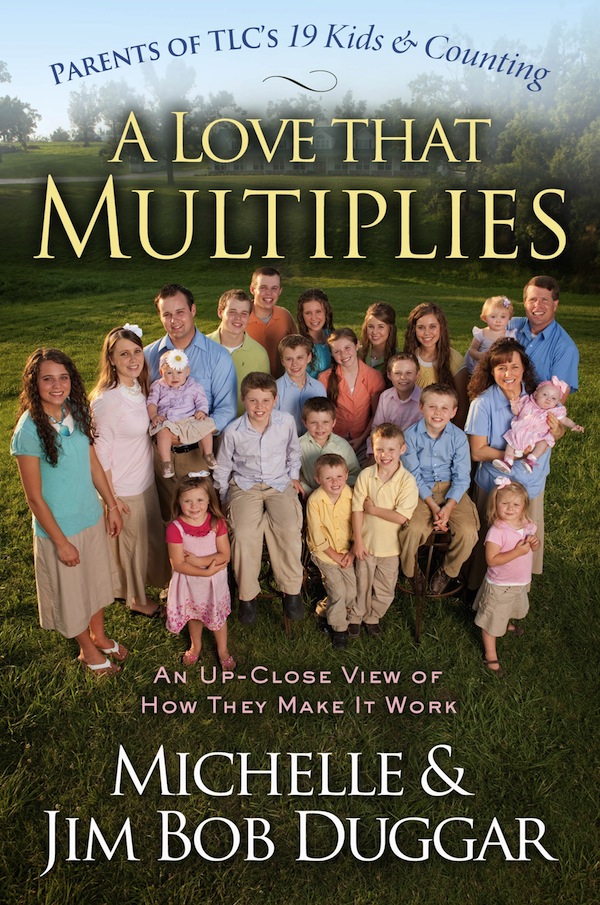 Now I have to say to start off, I love the Duggars (I’m sure I have mentioned this before). I was introduced to them several years ago while watching a documentary of them building their house on the Discovery Channel (though I don’t watch their current show).  I love their big family, how they are all so polite and dress so modestly.  I love how quick they are to praise God and how unashamedly and fearlessly they speak their heart and beliefs.  They are an absolutely beautiful family.  I also have to say that while I love them and what they stand for, I don’t necessarily agree with EVERYTHING they do. And while I find Michelle extremely inspiring I don’t entirely want to model my life after her.
I just finished reading “A Love That Multiplies”

.  It is the second book that The Duggar Family has written.  I enjoyed the first and found this one no less valuable.
Their first book “20 and Counting”

was PACKED full of useful advice for moms with families of all sizes.  There is also a lot of their history and background into why they do what they do.  I was constantly amazed and inspired at how often God led them to certain investments and/or career decisions that improved their family and financial life.  In fact, every time Jim Bob would make an investment or big financial decision without praying about it or against Michelle’s advice, it would end up failing in the end.  It was another testimony to me that God does care about our daily well being and that He knows so much more than we do about our needs.
The one thing bothered me about “20 and Counting”

was how vague it occasionally was.  For example, Michelle would go into extreme detail about the organization of her home and including several additional resources and where she got her ideas, but when a child misbehaved she would only say that she “immediately corrected them”.  Well what on earth does that mean?  HOW did she correct them?  She had mentioned that she didn’t use time outs or spanks, so what DID she do?  I need some step by step examples here, Sister!
“A Love That Multiplies”

did exactly this. I got a play by play account of how she deals with misbehaving and quarreling children.  I also learned WHY she is so soft spoken and how she was not always that way.  In fact, she had eleven children before she was able to train herself to stop yelling.  If she can do it with eleven, then I can certainly do it with four (even with a Spencer, after all, with ten sons, the possibilities of her having a “Spencer” of her own is much higher than someone with only two or three boys).  Though to be fair, I highly doubt that Michelle was ever as loud and obnoxious as I can be.
Michelle did not repeat the things that she covered in her first, she would just say “for more information on … you can read our first book. In “A Love That Multiplies”

she also spent a lot of time giving us a recount of what had happened in their lives since the last book was published, including the birth of their Josie who was born at 24 weeks after Michelle a gallstone and kidney stone attack elevated her blood pressure.
I would highly recommend both books.  Even if you don’t agree with everything (and I still don’t, even after reading both books) I believe that we would be hard pressed to find inspiration and advice from a mother more experienced and successful than she.
My all time favorite line from “A Love That Multiplies”