I wonder what happens in someone’s life so that they go from being a decent blogger to one that has to force herself to fulfill the duties that describe her as such. For me, it is simply a busy life. And the fact that when I am on the computer I am designing rather than spending time on the internet. Regardless. It’s time that I update.

Saturday I had my first race in a VERY long time. It was a 10k. Lucy and Emma ran the fun run. Lucy came in first in her age group and Emma came in third (and also beat ALL of the boys in her age group)

I wanted to finish in less than an hour, but I wasn’t sure if I could. It had been SO long since I had run with any semblance of speed. I also tend to start off too slow. So I tried to go as fast as my legs wanted me to in the first mile, ignoring my burning lungs. And it seemed to work. I finished in 59:35 which made my average pace just over 9 1/2 minute miles (don’t forget it’s 6.2 miles) I am VERY pleased! We had just enough time for me to grab a glass of water and a granola bar and we left.

After a quick shower and scour of the car, Matt and I dropped the kids off at Tara’s house (thanks again sweetie!) and traveled down to the Boston area so that I could try out for American Idol.

We slept in the car in a mall parking lot the night before (afraid of getting kicked out in the middle of the night), left our car there and walked to the stadium. We got in line at 5 AM, and it was RAINING. Not only that, but we forgot all decent rain gear at home (and I forgot anything with long sleeves or shoes that flip flops). But we stood next to a really nice pair of sisters that had an extra umbrella and they gave it to us (in exchange for a fruit roll up).

We stood in line for about 3 or 4 hours, then got into the stadium where we sat on wet seats. I did get a glimpse of Ryan Seacrest though and that was fun. They taped us cheering and yelling “No I’m the next American Idol” for what seemed like forever. Matt and I enjoyed pretending to scream. Then after he left we sat down to wait until my turn. I was in the very last section so were were there for 13 hours total by the time I was done.

We passed the time by making fun of what people were wearing, how they had their hair and a couple of girls who had CRAZY drawn on eyebrows. We watched Twilight on my ipod, listened to Harry Potter, tried to take naps in our seats and we played the movie game (this actor was in this movie with this actor who was in …)

When the section before ours got up, I went out into the halls to warm up. I started to feel the “pre race” anxiety and I quickly realized that I would RATHER be in a race. I got in line to see a couple of producers (NOT the big three) and we all stood in lines of 4. Stepped forward and sung a song. Then we stepped back for the next person to go.

I sang my best, and the producers said thanks but no thanks. BOY was I relieved. Matt really wanted me to try out because he thought I would really regret it if I didn’t. And I think he was right. I’m glad I did it, but I’m really glad I didn’t make it too. I really like my life right now (except for the Maine part) and I would have really hated to change it that much. Besides, I don’t want to open myself up to public ridicule like that.

Speaking of public ridicule! The BEST part was when we saw “Crazy Swear at Simon” gal walking the stadium practicing for her 3rd year running. You remember her. Two years ago, she was all dressed in goth silver, had weird eye shadow and swore EVERY word after she didn’t make it and kept giving the camera the finger. Then last year she acted all repentant and calm, but then lost it at the camera when she didn’t make it again. That was AWESOME!

Another really nice part was watching Matt. He was the one who encouraged me to do it. He’s having some “issues” lately because he it “too old” to do certain things (be a fighter pilot for example). And even though he never really wanted to do those things anyway, he’s still pretty upset that he CAN’T anymore. He figured that if I didn’t audition than it would be worse for me because it actually WAS a dream of mine for a very long time. It’s not anymore, but he didn’t want me to say “I should have” because this is the last year that I am eligible (apparently, if you are 29 you are too old to be the next American Idol). Anyway, occasionally, Matt will get this “boy I am glad I married her” look on his face. I just loved how often he had that look last weekend. Neither of us wanted me to get in, let alone WIN. But he was just so much more than supportive. When I met him in the stands after my shot, he said he was so proud of me. Thank you sweetie. I love you.

What was the worse part? The walk up a hundred stairs on our way out to the car. Didn’t I JUST run a 6 mile race? My legs were DEAD!

Then we stayed another night at the Air Force Base in near Boston and went shopping at the outlet store in Freeport on Monday. When we picked up our kids Spencer was REALLY happy to see us. Lucy didn’t surface until we yelled that it was time to go and Emma screamed that she didn’t like us and wanted to stay with her “Mommy with yellow hair”. Then she cried until she fell asleep in the car. I missed you too sweetheart, I’m so touched.

All in all, it was a good weekend though, good company, no kids and dinner at the Olive Garden.

Here’s a LO for you, it’s using “Life is Good” my Gina Marie Huff of Weeds and Wildflowers 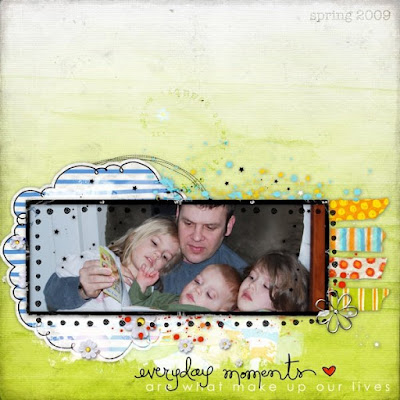