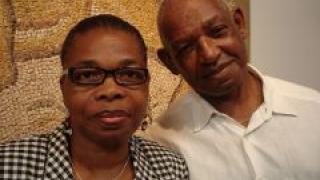 The above picture is of Eunice and Owen Johns

In case you were wondering “inimical” means Hostile.
So let me get this straight.  On the OFF chance that a child MIGHT be homosexual (which is a much smaller chance then the current media would lead us to believe, like 6% in the UK rather then the 85% coverage it seems to be getting), it is better that they live out their childhood in an orphanage or on the streets than with a traditional Christian family with a proven track record as foster parents (who, by the way, if they are true Christians, would love and accept the child regardless of sexual orientation, they just wouldn’t promote or teach it as right).
Never mind the fact that most children are in foster care to begin with because of some sort abuse or neglect and the best thing for them is compassion and consistency, and traditional Judeo-Christian beliefs are nothing if not compassionate and consistent.
But let me tell you what is actually angering me with this.  It’s probably not what you think.
While I am upset at the blatant disregard for the “equality” that progressives are continually clamoring for (let’s not pretend anymore that they want equality, they HAVE equality, what they want superiority.  And in some cases they already have THAT as well), what is upsetting me the most is that we are talking about a CHILD!
The average age of a child in foster care is about 10 and the average stay is around 3 years.
So CHILDREN between the ages of 10 and 13 are supposed to know whether or not they they are homosexual or heterosexual?  Tweens and barely teenagers are supposed to be thinking about sex SO MUCH that they are supposed to know whether or not they orient one way or the other?
Now I am not here to talk about whether homosexuality is genetic or not (though if you care to know what I think, email me and we’ll talk, not yell, or preach, but talk) but what I am going to talk about is why on earth our world is so obbsessed with sex!
I’ve already touched on this before, but I’m going to do it again.
This is the problem that I find with things like this court ruling, UNCRC, the repeal of DADT, CEDAW and the like: the authors and supporters of these sort of things seem to think that the entire world revolves around sex.  As an opponent to these things I can tell you that the reason I don’t support them is because I think that sex is a very small part of my identity and therefore, it should therefore be a proportionally small part (if not absent all together) of any and all legislation.  What started as a potentially good thing “get the government out of my bedroom” has turned into a progressively aggressive campaign to intrude into my family’s life and tell us what we can and can’t believe.
I am a woman, a wife, a mother.  I am a writer, an activist, a musician, a teacher, a student, a runner, a friend, a Child of God, I am a Christian, I am a bibliophile, I am a jokester, an artist, a computer geek, an accountant, a business woman, I really, REALLY like the Star Trek movies.  I really love the sun and dry heat.  I love to eat.  I was so proud of my son when he said “it was an accident” in the correct way for the first time.  I love babies, I love toddlers, I love pre-schoolers and kindergartener’s all the way up to eight year olds.  And once I have a nine year old, I’m sure I will love them too.
At what point did I mention my sex life?  Some of you  may think I said it when I said “wife” but I didn’t.  If something happened and neither my husband nor I could never have sex again, I would still be a great wife and he would still be a fabulous husband.
I don’t think that ANYONE should define themselves entirely by their sexual orientation.  If you can’t be a productive and positive influence on society without keeping your sex life on your sleeve, then you need to get a life.
IF mankind as a whole needs to be defined by one word, then I would say that Love is the one word that we should use.  To be more specific, The Pure Love of Christ.  Or in other word’s, Charity.
And love doesn’t equal sex.  We should all know by now, that you can have love without sex and that there are countless different kinds of love.
And if the “sexual revolution” has tried to do anything, they have tried to convince us that love isn’t needed or even wanted for sex (that is yet another progressive ideology that I don’t agree with).
Our world is changing drastically and quickly.  Some of it in good ways, most of it in bad.  We can no longer pretend that there is such a thing as “moral relativism”.  What is morally good for one person is going to be morally good for the next and visa versa.
Why?  Because it is a very slippery slope.  I think we can all agree that we can’t live in a society where anything goes.  First the age of consent for two minors is 13.  Then between a minor and adult is 17.  Then 16.  Then 15.  It’s only one more year.  Then the age of consent for two minors is lowered to 11, because, well, they are having sex anyway.  Exactly how young to they have to be before we allowed to call it pedophilia?  Don’t pretend it won’t happen.  The people who are behind the marketing of so called “sexual rights” know what is going on.  There are “experts” behind all of it.  I could go ON and ON.  But if want more information about how the “sexual revolution” and “sexual rights” have been sold to us, go here

.  Sex is just one of the many topics in those books.
Our freedoms MUST be protected.  One day the High Court in the UK rules that Christians can’t be foster or adoptive parents, then the US does the same (and the fact that our current judiciary looks to international law instead of our own shows that that is, indeed, possible if not probable).  Then how long before there is a limit on how many children a Christian family are allowed to have.  You know, for the “greater good”.  They wouldn’t actually single out Christians, they would SAY that it applies to everyone.  But since the vast majority of families with five or more children are religious, take a wild guess who it would effect.  Then the number is lowered.  And lowered again.  Anyone been to China lately?  Guess who WASN’T criticized by the UN for dragging a woman who was eight months pregnant from her home, injecting poison into her unborn baby and forcing her to give birth to the baby they had just killed because she already had one.  So much for a woman’s right to choose.  Apparently it only counts as an actual choice if they don’t choose life.
Oh but that was CHINA, this is AMERICA, that would never happen here.  So you agree then?  That we shouldn’t be looking towards a “new world order” or a “world without borders” and you also think that we shouldn’t let other countries tell us what to do and that our Constitution should be the law of the land?  Ok then, glad we are on the same page.
Get off the fence.  Too many of us think that these types of things are a world away from us and that we don’t need to worry about it here.  This is the Land of the Free, the Home of the Brave!  Washington is so far away, those people are just in their own little world.  It won’t change what goes on in my HOME.  It won’t actually reach us here on Main Street.  It won’t effect my FAMILY, not REALLY.  Tell that to the thousands of people who lost their husbands, wives, siblings, children and friends when those two towers fell.  America IS vulnerable.  And it is up to US to protect it.  Not Washington!  WE are the one’s who PUT people in Washington.  Washington only has power because we say they do.  If YOUR congressmen supported a bill that you don’t like, it’s because YOU didn’t tell him you didn’t like it!
We live in a republic.  A REPublic.  So we elect REPresentatives to REPresent us in the Capitol because WE are busy doing the necessary day to day things that keep our country going.  It’s important that we remind them to get out of the way so we can keep this country great.