Emma learned how to ride her two wheeler in 30 seconds

So we’ve been trying to get Emma to ride a two wheeler for a while.  For a few reasons.  First of all, she’s getting a little on the big side for her bike with training wheels.  Secondly, she easily gets stuck on hills or sand or uneven road and she is the child who just sits there and cries and screams instead of asking for help.  This was especially fun for me when we walked to the commissary and she and Lucy were on their bikes.  I know we could adjust the training wheels, but we never have the tools handy when we remember to do it.  So we’ve been gently suggesting and asking her if she would like to learn how to ride a two wheeler.  Her response was always the same.  She covers her mouth or eyes and runs away screaming “I’m too scared!”
On a second but related story line, Spencer has been banned from riding his trike in the house.  I know for some of you, that is something you never would have allowed in the first place, but he loves his trike, it didn’t hurt anything for him to ride around inside and he would happily ride around while I was otherwise occupied.  THEN he started using it as a stool to reach things he shouldn’t get.  And as you can imagine, stools with wheels aren’t very stable.  So it has been banished to the outside.  Spencer is a VERY fast trike rider.  His little legs go so fast you can hardly see them.  And when he crashes, it’s kind of scary.  So I had been looking into something that might prevent said crashes.  Enter The Strider Bike. 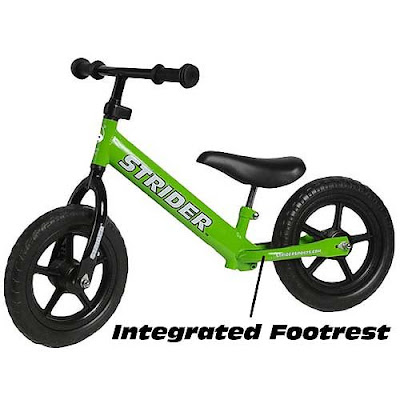 It’s a tiny two wheeler bike with no pedals.  The kids just run along while sitting on the bike and after a while, they just lift up their feet and coast along.  Matt and I watched the videos of 1 year olds doing it and were convinced.  His crashes have decreased 90% and he can ride his bike inside again (no way to use this as a stool).  He’s getting REALLY good at it and his favorite thing is going downhill.  He just lifts up his feet and coasts down the hill.  If he gets unsteady, he slams his feet on the ground and comes to a stop.  Some action shots: 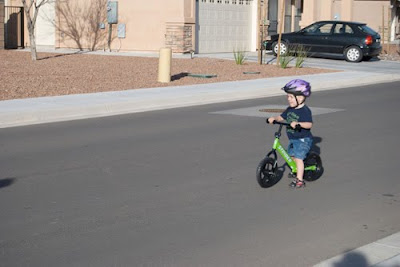 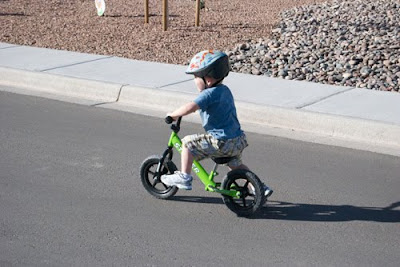 We got a higher seat post for Emma so that she could use it too.  Balance is the hardest part of learning how to ride a bike.  So if they can learn that first, then it’s just a simple step to pedaling.  Especially if they have experience with a trike or training wheels.  The other day we fended Spencer off long enough for Emma to get a good turn.  Then on Monday while Matt was at work, I put the bigger seat on and she spent the afternoon outside riding it with her sister while Spencer slept.  I can still remember the look on her face when she figured out how to turn by leaning.  She was so excited!
When Matt came home, he asked her if she wanted him to take her training wheels off so that she could use her bike the same way she used Spencers, just push along with her feet.  Her response was drastically different than it had been up to that point.  “I think so.”
Our next door neighbors weren’t home and their driveway was empty.  Matt had her coast down it two or three times on her old bike.  I came out to watch since she was doing so well.  Balance clearly mastered after a couple hours on the running bike.  Matt said “Ok, this time when you go down the driveway, instead of just lifting your feet to the sides, just put them on your pedals while you go down the hill.”  That was it.  Done.  A two wheeler riding girl.  She pushed off with her feet, put her feet on the pedals and pedaled down the street.  Didn’t get stuck once 🙂  You can’t imagine how excited and proud of herself she is.  It literally took less than 30 seconds to get her to pedal her bike.  Just look at her go! 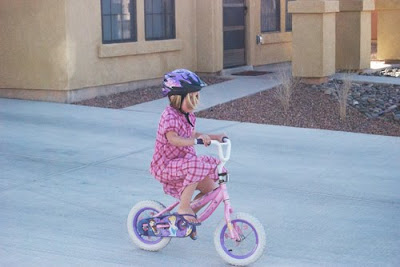 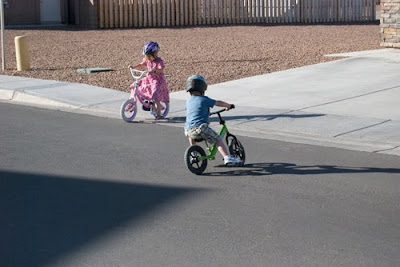 I must have been 10 years old when I taught myself how to ride a bike.  I can remember how excited I was the first time I rode across the short part of my driveway.  She spent a big chunk of yesterday afternoon out riding with Lucy.  Speaking of Lucy… here she is showing off for the camera. 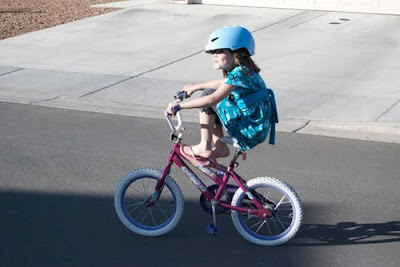 Beautiful girl, even with those teeth that are twice as big as her face. 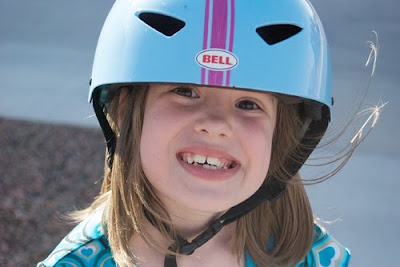 She’s cute even when she bites the dust.  Doesn’t she look tall? 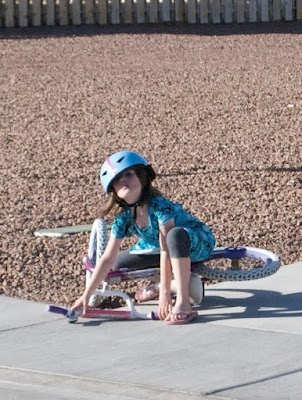 All in all, the Strider bike was money well spent!  I wouldn’t be surprised is Spencer has moved onto a two wheeler with pedals before he is three!  We’ll have to spray paint Emma’s princess bike.  I have some video of the event, Emma cheering herself on the whole time, but I can’t find the cord to put it on the computer.  Hopefully I’ll find it in the next day or so.