I am NOT a jogger 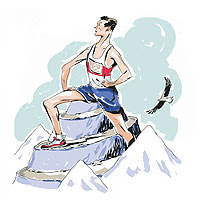 Every month or so a have a disturbing conversation with my husband. He mentions something about my jogging and I tell him that I don’t jog. I run. Then he talks to me about pace and training and tries to tell me that since I’m not an elite athlete, I’m a jogger. He doesn’t seem to understand that even though I’m only a moderate runner, I am still a runner. Even in my very pregnant state when I haven run in months or my current post pregnancy state, when I can’t even run 1/2 hour without stopping to walk, I am still a runner. Even if he doesn’t believe me, we have had this conversation enough that he at least has the sense not to call me a jogger anymore. If, for no other reason than to not start a fight. I have run a marathon by myself (while pregnant) and currently have three marathons in my sight in the next year and a half. No. I am NOT a jogger.

This is an article by John Bingham in this months Runner’s World.

The late Dr. George Sheehan, beloved Runner’s World columnist and arguably the first running boom’s premier philosopher, once wrote that the difference between a runner and a jogger was a signature on a race application. (For the youngsters out there, there was a time before online registration when you actually filled out a paper application, signed it, attached a check, and mailed it in. Quaint, I know.) As succinct as Dr. Sheehan’s definition was, it made the point. If you were motivated enough to train for and participate in an organized running event, then you were a runner. Anyone willing to risk public failure in order to be a part of the running community–no matter what his or her pace per mile might be–was a runner. Period. Kind of hard for anyone to argue with that logic.

But a few months ago, an ad ran in this magazine that drew a very hard line between runners and joggers. I immediately heard from tons of readers who were upset by the distinction. To me, however, such definitions are meaningless, since those of us who call ourselves runners already know why we call ourselves runners. Your reasons may be different from mine, but here’s why I know I am a runner:

I AM A RUNNER because my runs have names. I do tempo runs and threshold runs and fartlek runs. I do long, slow runs and track workouts. My runs are defined, even if my abs are not.

I AM A RUNNER because my shoes are training equipment, not a fashion statement. The best shoe for me is the one that makes me a better runner. I choose the shoe that goes with my running mechanics, not my running outfit.

I AM A RUNNER because I don’t have running outfits. I have technical shirts and shorts and socks. I have apparel that enhances the experience of running by allowing me to run comfortably. I can say “Coolmax” and “Gore-Tex” in the same sentence and know which does what.

I AM A RUNNER because I know what effort feels like, and I embrace it. I know when I’m pushing the limits of my comfort and why I’m doing it. I know that heavy breathing and an accelerated heart rate–things I once avoided–are necessary if I want to be a better runner.

I AM A RUNNER because I value and respect my body. It will whisper to me when I’ve done too much. And if I choose to listen to that whisper, my body won’t have to scream in pain later on.

I AM A RUNNER because I am willing to lay it all on the line. I know that every finish line has the potential to lift my spirits to new highs or devastate me, yet I line up anyway.

I AM A RUNNER because I say I am. And no one can tell me I’m not.