I'm not as young as I used to be

Please don’t roll your eyes, but I feel twice my 28 years today. My wrist is aching (sprained somehow in my sleep last week), my knee is aching (started to flare up during my bike ride this morning) and my poor legs are still recovering from my last hike (ok, not so much a hike as a mountain climbing adventure, and I have the bruises to prove it)

Emma had her 4th birthday on Friday. We woke up to two little girls bounding into our room at the crack of dawn to announce that it was Emma’s birthday. She was wearing brand new pj’s from Grandma and Grandpa Wilson. Apparently, Lucy didn’t think it was necessary to wait for presents to be opened. Fortunately, it was just the one. I hadn’t gotten around to wrapping the others yet. Matt took her out to lunch, but that was not an easy feat. I dragged her out the door and buckled her into her car seat, all the while being serenaded by the words “Mommy I miss you!!!” at the top of her lungs. She dried up once she realized she was going to get a new dress out of the deal. Lucy wrapped the rest of Emma’s presents and she opened them when she got home. Isn’t she beautiful in her dress 🙂 And that smile is to die for. You can see how cute her new hair cut is too. 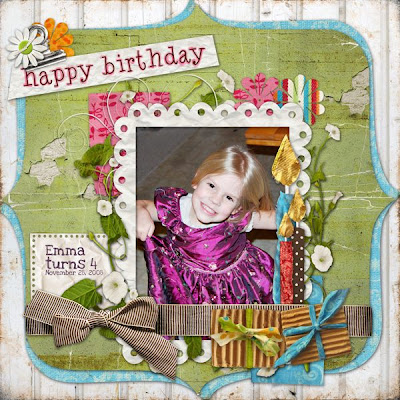 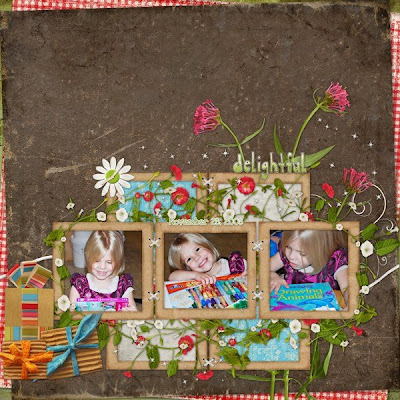 Credits: Both layouts using mostly the “Delightful” Collection by Gina Marie Huff. The frames on the second is from Kicking Up The Leaves

On Saturday morning, Matt and I took to kiddos to Aimee’s house to take full advantage of possibly our last nice day of the year. We hiked up the precipice trail to the top of Champlain Mountain. Boy was that an adventure. I REALLY enjoyed it for the first half. I like scrambling up rocks and stuff, as opposed to just a walk on a steep incline. We had to go up and down huge boulders and under short tunnels in the cliffs. I giggled as I told Matt that I felt like a refugee fleeing from the Nazi’s or something. There were some places that were bad enough that there were metal rungs drilled into the cliff face so that you had SOMETHING to hold on to. About half way up, we discovered that it seemed like there were more rungs than natural hand holds and the slick wet rocks (effect of the rainy day’s we’ve been having) didn’t allow for much traction. The freezing water that flowed down the face soaked into my gloves up to my wrists and my backside was wet from having to sit and slide down said wet, freezing cliff face. My legs were rubber and the M&M’s I’d had for lunch were long gone. At one point I remember saying “The summit isn’t getting any closer!” and towards the end, after being on level ground for quite a while, when I turned around the corner to see more metal rungs, I almost cried. If I hadn’t had Matt there, I couldn’t have done it. I am barely tall enough do it when it is dry, there was no way I could have managed it when it was as wet as it was. More than once he had to use his hands or legs as a foot stool for me. I told him that I would do this trail on my own if ever I became suicidal. Matt kept saying “It wasn’t nearly so bad the last time I did this, but it was dry then”. My foot slipped off one of the rungs at one point and it slammed onto the rung below, giving me a nice bruise all the way up my shin. I had to stand there on the ladder for a while before I could go on, I was shaking so bad (that’s what I get for having M&M’s for lunch). When we finally got to the top we discovered that we weren’t alone! Not only were keeping company with a nice sunset, but also several patches of ice. It was much colder at the top without the trees to protect us from the wind. We took the north face trail down the mountain. It wasn’t as sinister, but it was more icy. I fell a few times, but since a fall wouldn’t mean my imminent death, I was ok with it. Once we got down to the street, it was almost dark and my backside had thawed out. We walked back to the van, vowing that we were never going to hike that again. But now that I am safe in my nice warm house, and my bruise is beginning to heal, I’m looking forward to attacking it next summer… after a nice, long, drought.

Here are my latest scraps of Spencer. 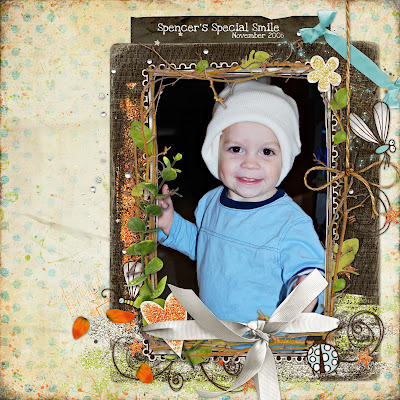 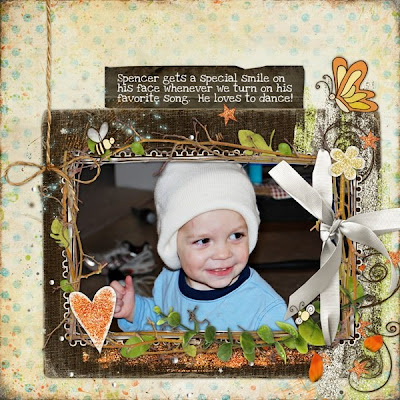 Credits: Everything from these pages are from “Happy Garden” by Gina Marie Huff

Spencer wearing Matt’s newest hat, the boy loves having things on his head. 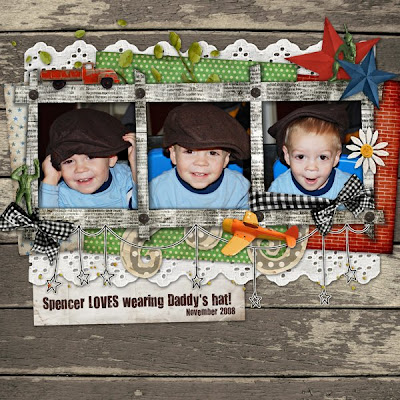 Credits: Frame is from “Breath of Fresh Air”, everything else is from “My favorite Things” both by Gina Marie Huff… can you tell I’m a fan of hers 🙂