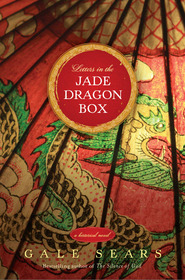 Gale Sears, the author of “The Silence of God“, has again delved into the realities of communist countries.   Like,  “The Silence of God“, “Letters in the Jade Dragon Box” is a novel inspired by the true story of one of the first members of The Church of Jesus Christ of Latter-Day Saints in China.  It is an emotional story about a young girl who escaped communist China to live with her emotionally distant great-uncle in Hong Kong (which was under British rule at the time).  Chen Wen-shan struggles with feelings of abandonment from her mother and rebelliousness from her uncle who disapproves of anything “western”.  We see the world through Wen-shan’s heart as she and her uncle uncover the truth about what life was like in Mainland China and why she was sent away from her beloved mother and grandfather at the tender young age of five.  In the process of learning about her past she begins to understand and love those whom she had always judged harshly.
I enjoyed “The Silence of God” as you may recall from my review last year.  I loved this book even more.  I am very impressed at how well Gale Sears was able to paint vivid pictures my mind by incorporating traditional Chinese culture and beliefs.  Confucianism and reverence for ancestors is especially fascinating (half way through the book I downloaded the works of Confucius, and if you remember my definition of a “the classics” you will know that is a very good thing).  I also saw many political parallels between Communist China and Communist Russia and even some with the United States in our current political climate.
The gospel lessons within were not exclusive to our faith (prayer, miracles, faith, tithing), so I would highly recommend this book, for everyone, not only members of the church.
As a side note – I love homeschool.  A few weeks ago I handed “Letters in the Jade Dragon Box” to Lucy with instructions to read the first chapter.  She didn’t have to finish it if she didn’t want to (this is not young fiction) but I wanted her to start it.  Several weeks ago we studied China as a family.  Lucy learned, among other things, about communism and Chairman Mao.  The first chapter begins with the death of Chairman Mao.  Immediately Lucy starts rattling of facts about his successor (that he had been exiled by Mao for rebellion, etc).  I just love that because what we have been studying together, my eight year old can pick up a book like this and instantly be able to put it into historical context!  I know that is not exclusive to home-schoolers, but I also know that had we not learned about it in our own homeschool, she wouldn’t have been able to do so.
{Disclaimer: I received this book for my family for free.  I received no other compensation for this review and all opinions are my own.}