Well it sure has been a while. Let’s see.

I cut Emma’s hair the other day. SUPER cute. I had to cut it short because she likes to swirl her hair around her fingers and make rat’s nests. Much harder to do with a bob.

I biked 20 miles again the other day. Not too long ago, a needed two days in between each ride to let my poor backside heal. I could only do about 11 miles before it burned so badly I couldn’t bike any longer. Last week, biggest loser was 2 hours long and Matt had decided not to watch it anymore (thanks Vicky; insert sarcasm here) so I was watching it while I rode. I really wanted to do 20 miles and hoped that if I just pushed through I could do it. I did 21 miles in an hour and 17 minutes. But it didn’t stop there. I was able to ride the next day and the day after that. My bum finally has a big enough callus to allow me to ride (um, maybe that’s not a good think 😉 I told Matt about it. I was so excited. His response? “I guess it’s time to get a new saddle”. Um WHAT? “Once you get used to one seat, it’s time to upgrade to a better firmer one.” But I like my saddle, it’s a good one. We picked it out together and it has a fancy pink design on it. “Yours is O.K. But not great. You need a better one.” Not that I am complaining that he wants to buy me something… but my saddle is so pretty! I have a biggest loser recorded for today, so hopefully I’ll get another 20 in. That’s at least a 1400 calorie burn.

I’ve lost 5 lbs since I started MyFoodDiary.com again. WW was great when I had a huge support group, it doesn’t work as well for me when I’m on my own. MyFoodDiary.com seems to REALLY do the job. It’s great.

Matt has all of his stuff done for the Air National Guard. We should hear back in a month or so. Word is on the street that everyone is really excited about having him join (as in, EVERYONE, like, in the whole state, all the muckadimucks). He was a little weirded out at first. What with Air Force not sounding as cool as say, the Navy or Marines, but then he remembered that Dirk Pitt was in the Air Force. And since Dirk Pitt is his hero… (although that standing might be in jeopardy ever since he saw the new James Bond movie. “Daniel Craig is SO COOL”.)

Lucy is turning six in a few weeks. She is really excited and told us that she wants here ears pierced. Matt and I had already decided that she is old enough to get it done when she realizes that it will really hurt and she still wants to do it. So since she still wants it after we talked about it (she’s been going back and forth for a while) we’re going to take her to Bangor the Saturday after her birthday. That’s the day we will get our Christmas Tree too. I got her some cute earrings at Walmart yesterday. Just precious.

Spencer is so cute that sometimes it hurts to look at him. His third front tooth coming in sideways is to die for. He gets a special smile on his face whenever I play a certain song and he loves to dance. It’s a good thing he is cute too, because sometimes he throws these tantrums that are just beyond ok (usually when he wakes up too soon from his nap.)

I’ve been working like crazy getting some scrapbook kits ready for Black Friday. I’ve got two Christmas Kit’s coming out. One of them is a collab, but I still have a lot to do with it before it is finished. The other one is mostly finished, want to see it? It’s called “The Goose is Getting Fat”. 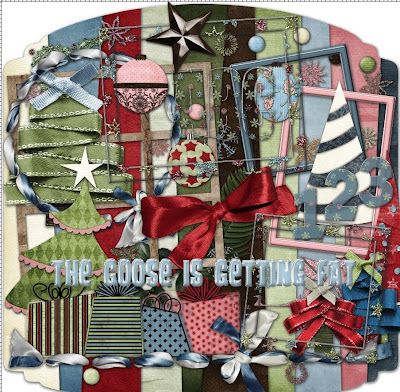 Well, we’ve started to let Spencer feed himself lately. This morning he had yogurt for breakfast. I’m off to give him a bath 🙂