Today the school kids had the day off of school.  So the Air Force invited the Mad Scientist’s over to show the kids some fun stuff.  I signed the girls up right away and they have been waiting impatiently ever since. Emma has been asking every day when “Evil Scientist” day was.

We walked down to the middle school, Spencer riding his bike, the girls and I walking.  I dropped the girls off for two hours of experiments and fun.  Spencer and I took the long way home, stopping at two play grounds on the way.  He switched back and forth between riding his bike and riding in the stroller.  I got home just in time to pee and get back into the car to go to the assembly.  Matt met us there (it was during his lunch) and the girls told us all about rubbing balloons on their clothes to make it stick (they wouldn’t do it on their heads because they didn’t want to get lice, my girls are sufficiently terrified of sharing things that touch heads).  Emma said her favorite part was when she touched a machine and it made her hair stand up.

We sat in the bleachers for the next hour and watched the “mad scientist” talk to us about weight vs pressure.  Here are six kids standing on a bunch of paper cups, the cups are holding up the combined weight of all kids and the disc they are standing on because their weights are dispersed. 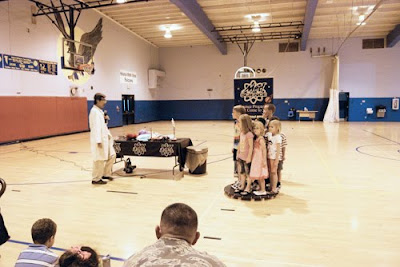 This was Spencer’s favorite part.  A volunteer showing us that the air blowing from the hair dryer can push up on the ball while gravity pushes down.  Spencer’s eyes got wide and he said “I try it!?” 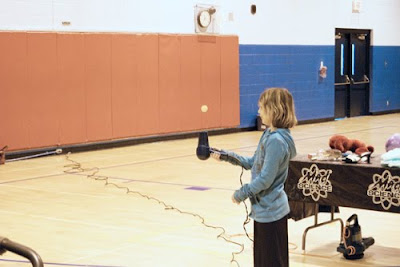 Lucy put up her hand to be a volunteer over and over again.  Finally, for the last experiment, she was chosen to help.  And it happened to be the coolest of the experiments… the hovercraft!  She refused the earmuffs (now I know it’s because she didn’t want to get lice).  VERY cool.  It’s a good thing it was the last experiment… Spencer freaked out the rest of the time waiting for his turn on the hovercraft.  They all left with a goodie bag. 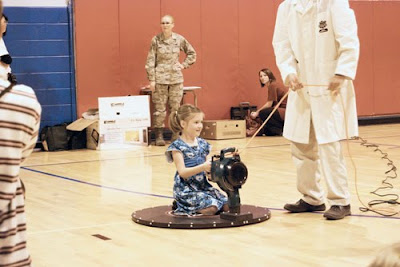 Matt had to leave back to work before he saw Lucy’s big moment, so it’s a good thing I had my camera (though it took quite a bit of photoshop magic to get the heavy orange tint out of the pictures.  On our way out to the car I over heard a lady talking to another woman about how “April is their month off of school” and that they’ll be going strong again next month.  She had a mess of kids around her.  I was already in the car but something made me get out and chase her and her stroller down.  I said I wasn’t so much interested in group “school” activities as I was in finding friends for my kids.  I got her info and apparently there is a “bible study” group that happens every Monday at the toddler gym near the commissary.  Now I’m not so much interested in “bible study”, but I’m all for meeting with other homeschooling moms that, though not of my faith, are devoted and faithful.  I just hope there won’t be any antagonistic feelings because I’m mormon.  Unfortunately, that happens all too often.