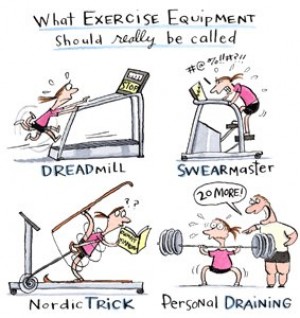 I actually started exercising daily and counting calories again shortly after Christmas, so the “I’m so sore I can’t walk” phase had already passed by the time the New Year rolled around. FYI – If you work out hard one day and then take a day off and workout again and take another day off, you will extend the “I’m so sore I can’t walk” phase. Exercise hard every day and the soreness will start to dissipate on day three and by the time you wake up on day four it will be almost gone.
My exercise goals are based on a conversation that my sister had with a friend (mother of five, lost a lot of weight and is looking pretty awesome these days).

Matt’s schedule at work has changed so now we are both waking between 5:00 and 5:30 every day. Waking up with him makes it a lot easier to do both of my workouts and in general my entire day is much smoother. I just need to make sure I head up to bed before 9 (which is fine since I’m usually ready to call it a day by 8. I’m super exciting, can’t you tell?)

Here’s my progress report for the week:

The hardest thing for me this week was not saying “I already worked out once today, I really don’t need to do it again.” I succumbed once on Thursday, but I’m not beating myself up about it since I feel like illness is a valid reason. I also pushed it all the harder on the day after to help make up for it a little bit. I just continued to repeat to myself “I’ll rest on Sunday”. I can assure you I have never looked forward to “the day of rest” as much as I did this week. My day of rest will be oh so sweet. It made me wonder if part of the reason some people don’t like the Sabbath as much as they should is because they don’t work as hard as they should during the other six days of the week.
My poor run this morning not with standing I can happily say that this weeks hard effort was not in vain. My weight after Christmas was 152. This week it is 148.5. I don’t expect this much progress every week, but it’s nice to know that it is working. And it will continue to work as long as I do.