Yesterday we started school again. The girls fell back into the routine beautifully. For about 3 minutes. But in spite of the few tantrums, it was a good day.

We started a Book of Mormon timeline that also includes 2001 to 2009 (when our little family started). The girls started drawing pictures of the key dates since 2001. Lucy freaked out because Emma drew her with a dress and I decided it was time to move on to the next subject. 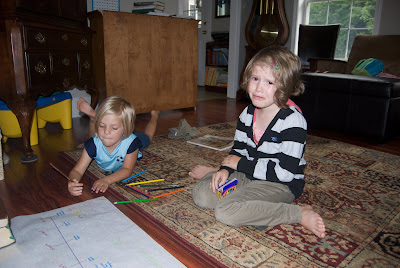 Among other things, we started learning about the American Flag. I read them the story about Betsy Ross and we made 5 pointed stars out of card stock.

While we were in Ellsworth later on, she saw the American Flag waving in the wind and said “There is the flag with the stars and the white and red stripes on it!”

Today for journal writing Lucy moaned about how she didn’t know what to write about. I said if she couldn’t think of anything, then she could write what she learned about Betsy Ross. She didn’t like that idea. Emma did however. Since Emma doesn’t know how to read yet, she dictates what she would like me to write while I write it in yellow marker. Then she traces over my writing with pencil. Lucy told Emma most of what to say since she couldn’t remember the story. Once it came back to her she said “Then some people came over and she saw the Washington guy. The End!”

And in continuation of the American Flag, we talked about what all of the different colors mean. Then they memorized the phrase “The red, the white, the blue, be brave, be fair, be true.” Even Spencer tried 🙂