The Oldest One in the Book 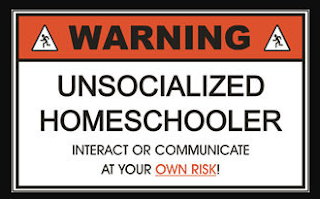 When people learn that I homeschool my kids, I get one of three reactions.  Obvious horror, polite acknowledgement or curiosity (occasionally followed by an eager desire to join the ranks).

But regardless of the reaction I get, the first question is always “Aren’t you worried about their socialization?”  My response is always the same.  No.

First of all, when most people ask about “socialization” what they actually MEAN is “social interaction”.  Those are two VERY different things.  I’ll start with the latter.

My kids get PLENTY of social interaction.  They go to church every Sunday, we have friends and play dates, and I regularly attend playgroups and other activities for each of their ages.  Oh, yeah, I forgot, they also spend 2+ hours a DAY playing outside, riding bikes or scooters, drawing on the sidewalk with chalk and generally running around and playing like kids should with OTHER kids that are in the neighborhood.  The girls sprint out the door at 4pm (you know, when the neighbors are home from school and done with homework) and come back when we call them in for dinner.

My kids have more social interaction here while being educated at home in a month than they did almost the entire time we lived in Maine.  Yes, even when Lucy was in public school.  When we first started, Lucy would occasionally ask to go back to the “school in the building” because she was so lonely.  But she was lonely before.  Since being here and in the neighborhood we live in, she hasn’t asked to go back to public school once.  In fact, she often tells me she’s glad she gets to be home with me all day.  She wanted friends.  That was all.  I wanted friends too.

Now, do I worry about my kids socialization?  No, not now that they are home-schooled.  WHAT!?  Yup.  Now that I have my kids home with me I am much less concerned about how they will turn out as adults.  Socialization means to make someone behave in a way that is acceptable to their society.  Or basically, to have everyone act the same, or “normal” if you will.

My kids say please and thank you, they brush their teeth and hair, bathe regularly, and they always where clothes.  Even that can’t be said of every public school child out there.  But beyond that do I seriously want my kids acting like every other 7 and 5 year old I meet?  HECK no!  I’ve met those kids, they are rude, secretive, selfish, dress WAY too old for their age in my opinion and demand to be treated like an adult.  I’m sorry, you are going to be treated like a seven year old, because that is what you are!  I must admit that I hold my kids to high standards.  But it seems that these days more and more parents aren’t holding their kids to any standards at all.  Does that mean you don’t let your daughter play with other 7 year olds?  No, of course not.  But that does mean I keep an eye on what they are doing and what they are talking about.  But isn’t that something EVERY mother does?  Heck, she even has some friends that I am not particularly fond of, but that doesn’t mean she can’t play with them.  But I am confident that Lucy is being a good and strong influence on the girl rather than the other way around.  Which, to be honest was one of the reasons we pulled her out of public school to begin with.  She was a follower.  Now she is a leader.


I read recently on another blog:

I have no problem at all with our schools in the area.  But, what I don’t really love is what my kids are learning from some of the OTHER kids at school!  My second grader just learned all about the “F-word”, some crude jingles, that “so & so” is the richest kid in the class and the rankings following, to not include kids that aren’t “cool,” and that giggling about overweight children is funny.  Oh, we’ve had many talks, lately. What is he going to learn in 3rd grade?


I have a friend (you know who you are:) who mentioned to me today that her second grader wants a cell phone because half of the kids in her class have cell phones.  What on earth does a seven year old need a cell phone for?  She only ever goes anywhere there will be a phone for her to use anyway.  It’s not like she’s driving or may have an emergency.  If there is an emergency, the ADULT in charge will call!  Why on earth are they SO eager to grow up?

I never waver in my decision to homeschool.  But occasionally I am worried that Matt is worried about it.  He wants them to be smart and succeed.  And public school is the only thing he has ever known, so it’s hard for him to branch out to something SO out of the ordinary.

But then today while at a play group I  learned that the age of consent in our state is THIRTEEN (as long as the partner is under the age of 18 and not in a position of authority, like that makes it any better). Who are these geniuses who think that a thirteen year old can grasp all of the physical, emotional and psychological effects of sex?  And you know what “age of consent” basically means right?  The age at which it is no longer illegal, not necessarily the age at which it happens.  No.  I’m not about to send my child out into that.  Not in this town when the average age of a woman who gives birth in our hospital is 15.

Anytime something like that happens, Matt says “Alright, homeschooling it is!” and then I know that HE knows it’s working too.

***As always, this is MY family and what works for US!  Of course, as a human, I think I’m always right and think that people who don’t agree with me are wrong.  That being said, NO, I do NOT think that homeschooling is for everyone!  Nor as a Latter-Day Saint, do I think homeschooling is mandatory for salvation.  PLEASE do not take the defense of my way of life as an attack on yours!  And it’s really sad that I feel like I have to add this disclaimer.