On the way home from my dr’s apt. we took an impromptu trip to the Zoo.  I had planned on going this Saturday with Matt, but saw a sign on the side saying there was some special event planned for Saturday.  Wanting to avoid crowds and parking nightmare’s we went today… sans Daddy.

The zoo here is very small.  Just the perfect size for a mother with three young children.  We were able to look at all of the animals, and play at the provided playground before starting to whine about being bored or tired.

Some of the most noteworthy exhibits were the black swan, the white swan as well as some other exotic geese and ducks.

Then there was the capybara.  Which looks like an enormous Guinea Pig.  The one we saw was about as tall as Spencer.  We got to see it for just a few minutes before it hid in the water.  It’s a hot day, I can’t blame him. 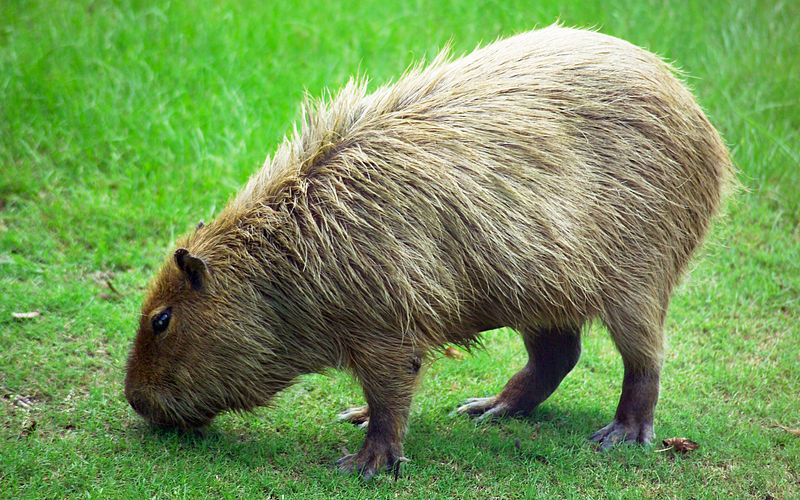 Then there was a Chihuahua Raven, who literally said “Hi” to us… Twice.  When we came by his area, he walked right up to where we were and looked at us.  We read the sign that said these birds could be taught to sound like humans and speak.  Then he said “hi”.  Crazy.

We saw a great horned owl, an ocelot, a bobcat, coyote’s, gray wolves, a black bear, an alligator, a huge tortoise, funny little things that kind of look like raccoons but aren’t, otters, a golden eagle, some ring tail lemurs, several handsome male peacocks (who were all very loud) one of which decided to delight my children and me with a full spread of his beautiful plumage!  Amazing.  I’m always amazed at the bright and brilliant colors that are found in nature.  We also got to see kangaroos (who did NOT bounce for us), Emu, a giant turkey, a big kind of goat with spiraled horns and a lot of other things I can’t remember.
But our all time favorite exhibit was the Capuchin Monkey’s.  Most of them just looked at us with mild interest, but there was one little flirt, who looked quite a bit different from the rest that we had to come and visit over and over.  He followed us around where he could, stopped, cocked his head and gave us the biggest grin you have ever seen!  Then he would take his tuft of black hair on the top of his head and wiggle it back and forth like an old man telling a dirty joke.  It was the funniest thing!  I wish I had my camera with me.  As it is, you’ll have to make do with the wikipedia pics I’ve found.  We enjoyed our little zoo so much that I bought us a family membership (for only $25 a year) and will certainly be making a return visit later on when Matt can come with us… heck, maybe even when he can’t.  I just have to make sure I remember my stroller.

Matt decided skip his workout today and come home for lunch.  The kids wasted no time in telling him all about our adventure.  We thought we had exhausted the list of animals when Spencer yelled “An we saw a adadader (alligator).”  It always surprises me when my two year old not only says something that makes sense, but isn’t just a repeat of what someone else said.  But the fact that he remembered the alligator when no one else did!  They love their animals and I love my kids.