So, we were late to church today, so we sat in the overflow in the gym (it’s really crowded in the summer). I’m sitting there trying to keep three children reverent (and failing might I add). Matt finally comes to sit with us after blessing the Sacrament and Emma tries to talk to me about something. Matt is holding Spencer and talking to Lucy. I answer whatever question Emma has and as I look over her head to the fire exit right next to us, I see a black thing attached to the wall. I squint my eyes (since I can’t trust them when I wear my glasses) and I think I know what it is, but ask Matt for verification. Sure enough… it’s a bat. A live, bat, just hanging upside down on the wall not 10 feet from where we sit, just snoozing away. Nothing between it and my family but air and unconsciousness. I totally freaked out and Matt tried to calm me down (“just think of it as a squirrel with wings”, um how is THAT supposed to help?) I managed to keep my composure, and after the meeting told the BP about it. He already knew and was going to wait until after church to deal with it because “it’s going to involve rabies and a lot of blood”. I have no idea how they managed to get rid of it. I hope they didn’t kill it, since I had plenty of ideas that didn’t involve rabies or blood. I’m just glad we will be in Woodstock next Sunday.

Besides, I’m playing with the idea of going inactive until Spencer goes into nursery. The boy is an absolute basket case if he doesn’t get his nap. It’s the third week in a row we haven’t been able to go to all three hours because of his screaming. AND to top it all off, he screams the rest of the day at home because he’s over tired. Poor kid. I wonder if I could find and empty class room and bring the pack and play to church 🙂

Speaking of Spencer, just in case there was any doubt, he is officially Matt’s son. This morning I went upstairs to put my makeup on, when I returned, I found him on the kitchen floor. He had found, opened, and put on a watch that Matt won from the Maine Dental Association for being the co-winner to the MDA Inaugural limeric contest. 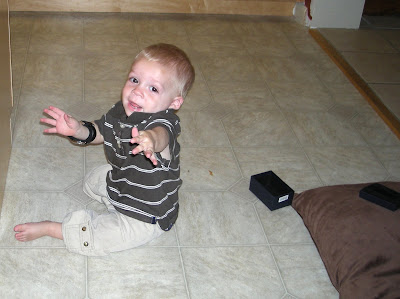