I am trying to start my own business and it’s been pretty hectic getting it all started. Not as bad as it could be, concidering, but I am already a busy woman. On the plus side, almost every trip into Ellsworth last week was tax deductable 🙂

Last week I gave Emma and Spencer baths in the kitchen sink. It was pretty funny! 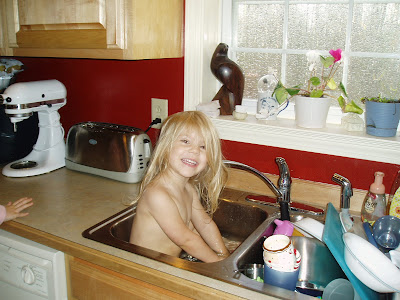 We picked up some milk from a local farm last week, we skimmed off the cream and made some butter. On Saturday we had pancakes made with homemade buttermilk, homemade butter, homemade jam and almost homemade whipped cream (the cream I used was from the store). It was so yummy. We are saving the rest of the butter we made for Thanksgiving. It was so cool! 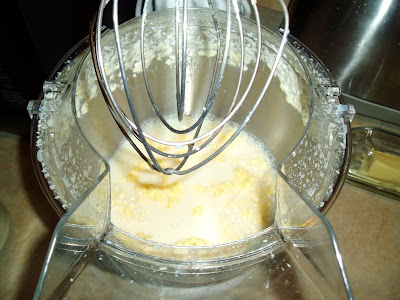 I’ve been to three rehearsals for A Christmas Carol so far. I feel painfully inadequate. I am by far, the least experienced person there (and that is including the three children. All of the other adults are acting vetrans and tow of the people have been in this version of the show at least once (one has been in various versions of A Christmas Carol like 20 times!) I have no idea how or why I got the part! Under normal circumstances I would say that it was because I can sing well, but there isn’t even very much singing and it’s all in unison anyway, so anyone who can carry a tune would work just fine. But I don’t even think that that is the reason since I only got through about three lines of my audition song before I forgot the rest of the words. I half expected to show up to the first rehearsal and have the director look at me and say “Oh my, I’m sorry, you weren’t who we thought you were, we must have gotten something mixed up somehow!” In a lot of ways that would have been easier. But I am excited about it never the less, and the accents are fun. But I keep slipping into a New Zealand accent but I don’t think that anyone can really tell. Spencer has been good for the most part. He screamed for an hour last night, but once he went to sleep he was fine. Everyone else has been really understanding about him. During the day rehearsals he’s fine. But I don’t have to go on Wednesday, because they are working on the Cratchett scenes only and I am not in those so I don’t have to go. But Matt has mutual so I won’t be able to spend my night off with him 🙁

I feel like I am running on empty. My house is a mess and my kids are in serious need of my attention. They have done nothing but watch TV for the last two days. One thing is for sure, I am not going to be bored this winter.