What if Their Story, Were My Story? 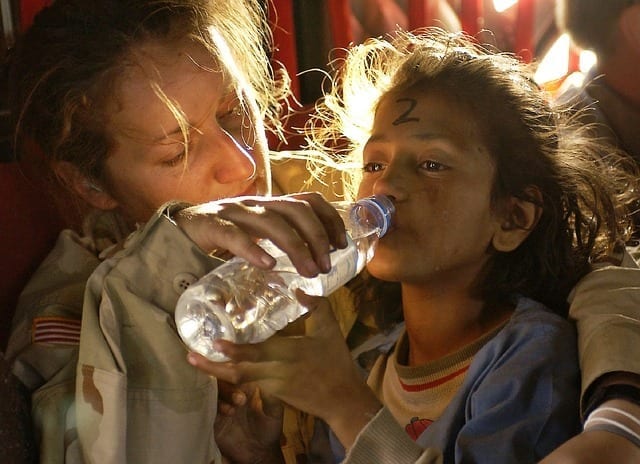 It’s been almost a year since I’ve written anything thoughtful and substantial here on my little blog.  It’s been over two years since I have felt moved to write anything political in nature.  My reasoning has been pretty simple: I don’t care about politics anymore.  Crazy, I know!  For years I watched many of my peers turn a blind eye to the horrors of the modern world, only to turn my back on it all just as they began to wake up.

The reason for my shift in focus is better left for another post, but suffice it to say I made a decision to focus less on the country and more on my relationship with my Father in Heaven.

So why am I breaking my silence now?  Why a political post after all this time?  Because at this moment, there is a clash between the two.  I am unashamedly conservative and libertarian in my political ideologies, so my thoughts on the issue of President Trump’s new Executive Order may surprise some of my long time readers.  Then again, they might not.

As is the case with all things political in this country, there is a tremendous amount of partisan hyperbole and fear mongering from the opposition, and there is an equal amount of justification and misdirection from supporters.  Because of this, I would like to mention a few key points on the Executive Order itself.

What is the precedent for this type of action:

So, given the fact that this is a temporary action that has a clear precedent by the last two presidents (and Jimmy Carter), what do I think?

It’s wrong.  Absolutely wrong, entirely unacceptable, and I expect more from my country and my fellow Christians.

My thoughts here may seem scattered, and anyone who is does not share my faith, may not be familiar with my references, but I will do my best.

Last General Conference, I remember listening to Elder Uchtdorf speak of our royal heritage.  He said, “We are of the royal house of Elohim, the Most High God. We walked with Him in our premortal life. We heard Him speak, witnessed His majesty, learned His ways.”  As he spoke of the plan our Father in Heaven had for us and the subsequent war in Heaven over our freedom to choose, I remember thinking about the wars I have read about in both history books and the scriptures, and how so many of them began because of sibling rivalry or other familial contentions.

I thought about what it would be like to have my own children love power and pleasure so much more than each other that they would seek to kill or imprison or torture one another.  What a horrifying idea!  I love them all and could not bear the thought that they treat each other in that way.

Then I remembered what Elder Uchtdorf had just said.  We are all of a royal heritage.  We are all children of the same Heavenly Father and Mother and we each have inherited their Divine natures.  How is any war different from those wars fought between siblings?  There is no difference.  Our Father looks at the wars between Israel and it’s Arab neighbors with just as much heart break as we do when we see our own dear children treating each other poorly.  He looks at the rhetoric and vitriol between progressives and conservatives and He weeps.

I’m going to land a massive truth bomb on all of you.  When differences of opinion and ideology dissolve into contentious debates, name calling, xenophobia, and sense of superiority and pride, it no longer matters who is “right”.

After the Savior visits the ancestors of the Native Americans shortly after his crucifixion, he tells them:

For verily, verily I say unto you, he that hath the spirit of contention is not of me, but is of the devil, who is the father of contention, and he stirreth up the hearts of men to contend with anger, one with another.

Behold, this is not my doctrine, to stir up the hearts of men with anger, one against another; but this is my doctrine, that such things should be done away.

What does that mean?  As soon as the spirit of contention has entered into our hearts, we are no longer on the Lord’s errand, even if we are speaking truth.  Contention allows Satan to twist truth into lies, no matter the topic.

So how does this relate to President Trump’s Executive Order?  Because the people whom are being barred from entering the country are our brothers and sisters.  Whether they are seeking refuge, political asylum, liberty, employment, family, or friendship, they should be allowed to come to this land of opportunity.  We are not somehow better because we were blessed enough to be born here.  In fact, because of that blessing, we have a greater responsibility to those who were not and fighting about it will never solve the problem.  Only loving each other as fellow children of the Most High God will.

In the Book of Mormon, we read of several different groups of people who were fleeing persecution, oppression and violence.  In fact, the story begins with a single family stealing away in the middle of the night to escape execution.  The Nephites, Limhi and his people, Alma and his, the Ammonites, and other converted Lamanites all fled oppression. And what did the people of God do when they met them at the gates?  They welcomed the refugees with open arms, and treated them as equals.  Not once do we read about sending them back because there weren’t enough jobs or resources in Zarahemla, nor were they afraid of suspected traitors in their midst.

One thing I’ve been seeing a lot in my Facebook feed is something along the lines of this: “Safety is our number one priority” or several memes like these: 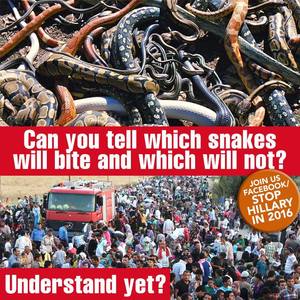 To these, I will quote Elder Uchtdorf yet again: Stop it.  Just stop.  First of all, we are not talking about snakes or gum balls.  We are talking about human beings.  Women, children, and men who have lost their homes and turning to us for peace.  Secondly, no, safety is not my number one priority.  My number one priority is serving my God and serving and loving His children.

Elder Uchtdorf was a refugee during World War II.  The early members of The Church of Jesus Christ of Latter-day Saints were violently driven from place to place, until 1948 those of Jewish heritage had no where to call home and were often driven out of nearly every country (including our own), today Christians are hunted and killed in many areas of the Middle East and northern Africa, and the Savior himself was once a refugee.

Why do so many people think this time is different?  Why is it ok now when it was evil then?  Being American doesn’t mean we are above making terrible mistakes and if any of you think differently, look up the voyage of the St. Louis.  FDR turned away nearly 1000 Jewish refugees who were fleeing Nazi Germany in the name of “national security”.

As a member of The Church of Jesus Christ of Latter-day Saints, I believe that the United States was Divinely inspired and was established for the purpose of building up the kingdom of God.  I think that some of us have taken that fact and elevated the purpose of this country to be more than what it is meant to be.  2 Nephi 25: 25-27 says:

For, for this end was the law given; wherefore the law hath become dead unto us, and we are made alive in Christ because of our faith; yet we keep the law because of the commandments.

In context, Nephi is speaking of the Mosaic Law, but the idea is equally true in this instance.  The law (our country) was made to support Christ and to help us receive Him, and keep His commandments.  We were given unprecedented freedom in this country so that His gospel could be restored and we could inherit all that our Father has.  Without the Gospel of Jesus Christ, there is no point to the freedom and safety this country enjoys.

Helping other people is always a risk.  Most of the time we worry that the money we give to a pan handler on the street will be wasted on drugs, or the stranger we hire to paint our house will make off with our cash, or maybe we worry that the man we invite to our table will steal our silver candlesticks.

I would like to close by quoting Elder Patrick Kaeron from last April’s General Conference:

Being a refugee may be a defining moment in the lives of those who are refugees, but being a refugee does not define them. Like countless thousands before them, this will be a period—we hope a short period—in their lives. Some of them will go on to be Nobel laureates, public servants, physicians, scientists, musicians, artists, religious leaders, and contributors in other fields. Indeed, many of them were these things before they lost everything. This moment does not define them, but our response will help define us.