Yesterday I had an unexpected delivery.  I was greeted by the FedEx guy who had ten boxes for me.  TEN!

As you may or may not know, Matt and I are the proud owners of a small watch company.  Irreantum Watch to be exact.  For those of you who frequent 1 Nephi, the word Irreantum is an ancient south semitic word for “Many Waters”.  Quite appropriate considering we specialize in dive watches.

Anyway, we are currently working on the first production run of our first watch.  The Magellan.  Isn’t it a beauty?  This is available in four dial options.  This is a photoshop rendering of the carbon fiber dial.  We also have black, blue and orange.  And as luck would have it, the popularity of my green color has made it necessary to include green on our next production run!

Anyway, I’ve started to ramble.  We have a prototype that is SO close to being done.  Matt was hoping to have it in hand by the end of the month so he could wear it to his brother’s wedding, but as the wedding is next weekend, I don’t think that is going to happen.  We were told it would take 60 days for after we paid the initial deposit for the prototype to be finished.  It has now been over 100 days and we have yet to have a prototype.  It’s really frustrating.  This is a very good and reputable company that several small watch companies use.  They make a great watch, but they aren’t fast… neither are they great at communicating with their customers.  Not to mention a language barrier which makes everything more fun.  Getting any information from them is like pulling teeth (you’d think it would be easier for a dentist, hardy har har.)
We are especially concerned because we have given our customers a loose ship date of the end of Summer.  If they don’t get that prototype done soon, we aren’t going to make that deadline.
Fortunately we know they are close to being done.  They have sent us pictures of our unassembled watch and the only thing we are waiting on is the bezel; which had to be redone as the first try was poor quality.  So here are some photos of the unassembled watch.  Keep in mind that the bezel (the thing in the middle with the numbers around it) isn’t finished.  It still needs to be finished cut to the right shape and polished.  Also our logo and other markings still need to be etched on the case back and bracelet clasp. 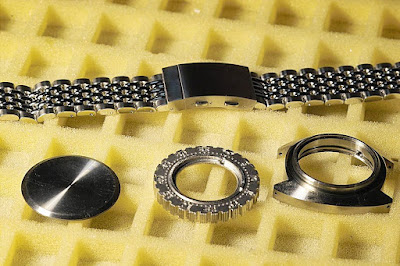 Now I don’t know much about watches but I have certainly learned a lot about them in the last several months.  I’ve seen lot and LOTS of different options and finishes and I have to say, I think that bracelet is AMAZING!  It’s a fairly common idea, but Matt made some modifications and it is just beautiful!  I love the case too (the thing on the far right).  Such a beautiful shape.  It is a brushed finish (rather than polished) but I think we may have one polished just for us so we can have one of each.
And here are two of the four dials with some hands.  The black hands go on the orange dial and the orange on the black.  There is only minute hands shown for the black dial, the hour hand will be the same shape as the black hour hand for the orange dial, except it will be a very light gray instead of black. 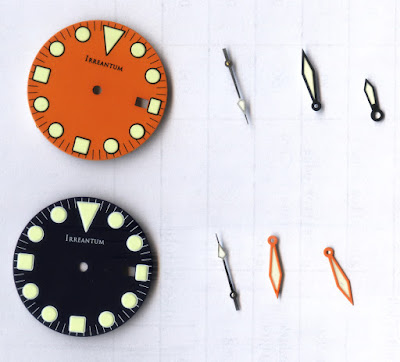 If you look really closely at the black dial, you can see how thick the painted lume is (the hour markers).  For those of you who are not WIS (watch idiot savants) the square hole next to the 3 O’clock is where you will see the date marker from the movement.  We are really happy with it, there won’t be any trouble reading this in the dark!
Here is a scanned image of the carbon fiber dial.  Beauteous! 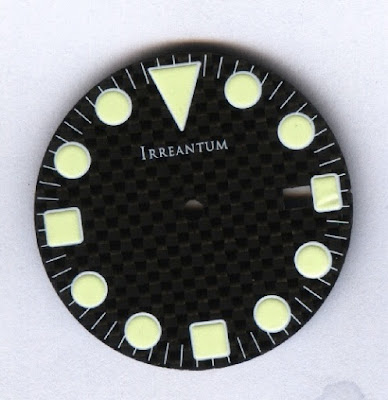 Fortunately, our loyal customers seem to be very understanding (probably because they’ve dealt with delays before).  They are much more concerned with having a great quality watch then to have it quickly.  THANKS guys!!
I bet you are still wondering about those ten boxes if we don’t have a prototype yet.  Well I’ll tell you.  Most watches come with a case.  We spent several months trying to find a good company to get some cases.  We contacted several sources for some custom leather cases, but no one would ever return our calls or emails.  Eventually, Matt decided against a leather case anyway and opted for a waterproof case. Enter Fuerte Cases.  We found a great water proof case to ship our watches in with customizable foam.

So it we had 200 cases delivered to our home yesterday.  We are still waiting on our labels, but I wouldn’t be surprised if we got labels before the prototype.  They are bigger than I expected, but Matt thinks th
ey are the perfect size.

Due to the delay, we are extending the pre-order price to two weeks after we have the prototype in our hands and have posted pictures.

In the meantime, I have 10 big boxes in my living room because we our garage is still a disaster.

In other news were are also in the very beginning stages of our next watch.  I hope to get this one in green too 🙂